The planetary aspects cause earthquakes by the action of Lense-Thirring and not by normal processes. An interesting example of this phenomena was showcased on one of the Star Trek Voyager episodes. The star ship was caught in a weird gravitational anomaly that surrounded the planet. Even though Voyager was very small it was trapped in a zone far above the planet. The time differential between the ship and the surface of the planet was causing powerful gravitational disturbance on the planet below. Several days would pass on the planet for every minute that passed on the ship. If the ship tried to use the thrusters to go higher and try to break free the earthquakes on the planet would increase as the Lense-Thirring forces were amplified by the increased distance. This helps to explain why far away planets can cause devastating effects upon the earth.

Lense-Thirring acts like torque and this means the father away you are the greater the effect. As there is a fairly large time differential between the outer planets and the earth the torque on the spacetime frame becomes greater the farther way you are. This seems counterintuitive as things farther away should have a smaller gravitational effect, but the time differential between Pluto and the earth is on average about 5.3 hours. We can then say that the time warp between Pluto and the earth is 5.3 hours. In other words time is bent back by 5.3 hours between the two planets. When we observe Pluto it is actually 5.3 hours in relative motion distant from it’s observed position. In Lense-Thirring this results in powerful forces being exerted between the two bodies. Without introducing effects defined by relativity the actions of the planets seem mysterious, or even impossible. (I published an article quite some time ago in the journal, ‘The International Astrologer,’ which detailed the mathematics of this phenomena.)

The gravitational field of the solar system is always in a state of flux due to the motions of the planets and the motion of the sun. The rotation of the galaxy also contributes to the general fields agitation. As the planets move through their orbits ripples in the field are created. These ripples interact like sound waves creating a general harmonic pattern in the solar system This is why all the planets are locked in gravitational harmonies, such as the well known 3/2 orbital periods of the Plutoids and Neptune. Lense-Thirring interactions between the planets results in frame dragging. Even when a planet rotates the field around it is disturbed and there are measurable currents in spacetime that are created. With a rapidly spinning massive planet like Jupiter the effects are very pronounced. The spin of a planet causes only small time effects, while the effects of the orbits of the planets is much greater. 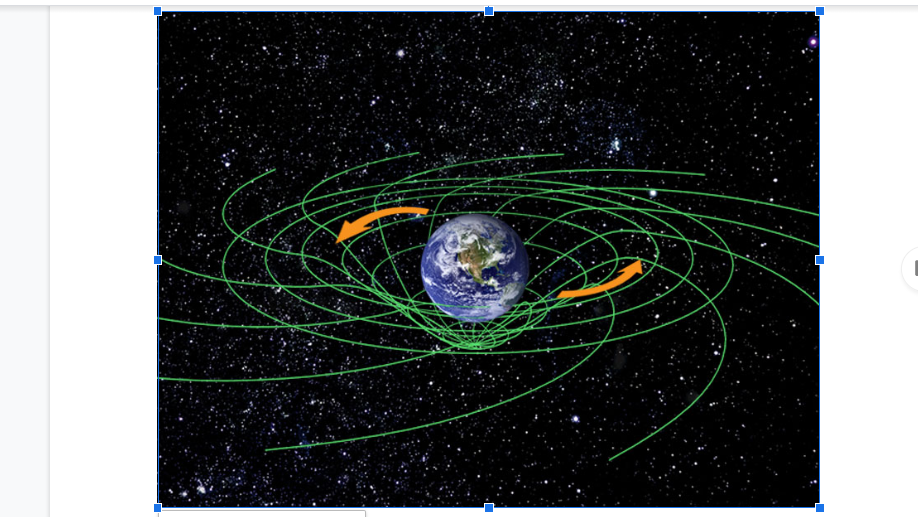 As the earth spins, space is “dragged” along with the spin. This creates further ripples in the spacetime matrix of the solar system. Johannes Kepler observed that the planets orbits obeyed complex musical rules and even small disharmonies were not allowed. As the planets orbit indeed small disharmonies are created which causes unstable regions in the system. These may appear mathematically small when we listen to music if an instrument is out of tune we can notice it. I play guitar and if one of the strings is off by even a tenth of a note I can hear it plainly when a chord is played and so the guitar must be re-tuned. Similarly in the solar system when the critical angles of the 24th harmonic occur between the planets the sound-like waves pile up and are actually amplified. When the planets are not at critical angles the diffraction patterns created between them are neutral and relatively stable. However, they enhance one another at critical angles, acting like a perfect chord in music, and produce disturbances in the field in a regular pattern. If any planet in it’s orbit does not adhere to the overall harmonic pattern it is ‘herded’ into a suitable stable orbit, or is destroyed. This is what causes the resultant regular patterns seen in the earth’s seismic field.

The most noticeable effect of the harmonics of the planets is that the electrical flow in the solar system is altered and we often see solar flares during these periods. This also increases flux transfer events around all the planets, and on the earth increases in geomagnetic activity.

Previous studies found that earthquakes generally occur in greater numbers before an aspect when compared to the period after the aspect. In the graphs that follow as they are based on five day periods, the peak may appear after the actual date of the aspect, or before.

While the peak is slightly after the date of the aspect this earthquake response curve manifests a perfect Mexican Hat Probability wave profile. The quantum-like response of the seismic wave pattern is due to the relativistic effects of Lense-Thirring. This makes event timing uncertain due to apparent quantum effects. 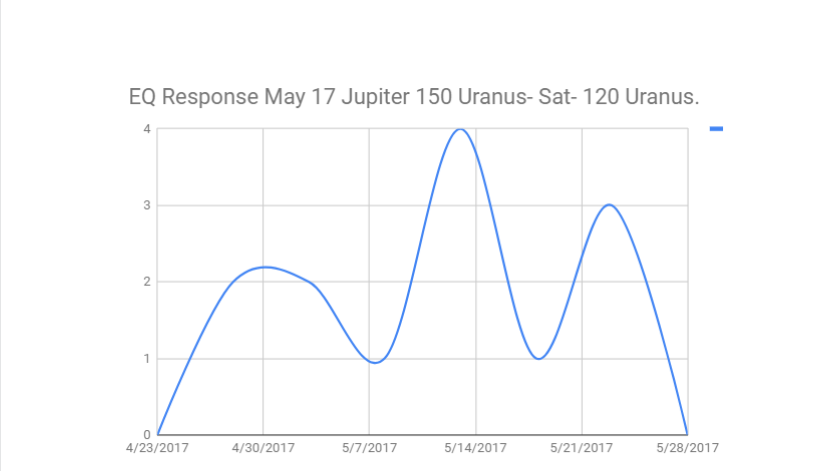 Here we have a full Mexican Hat profile offset slightly forward in time of seismic responses. The extended period of reaction is due to the two simultaneous aspects that occurred: Jupiter/Saturn/Uranus.Patterns like these happen due to the dynamic harmonic forcing of the system. 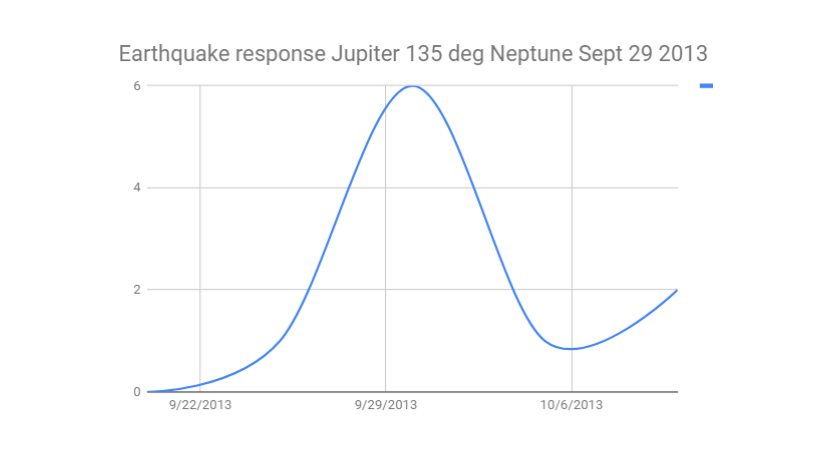 During this aspect we observe a normal response curve with little indication of quantum effects. It is offset forwards in time  to the actual aspect date. These observations may be skewed, however due to the resolution of the data. 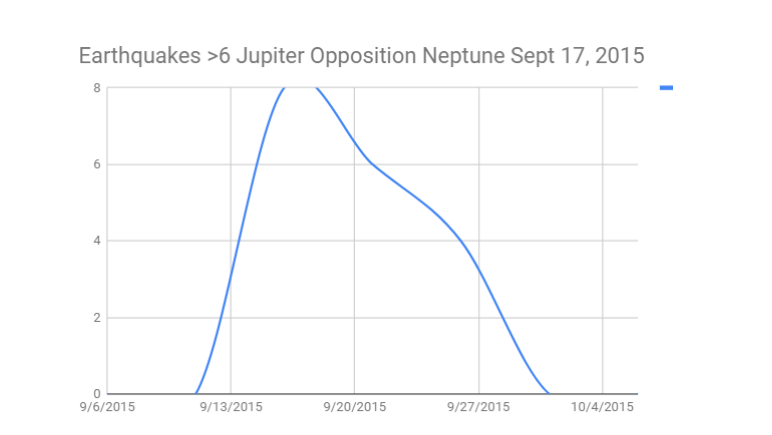 Here we have another response curve which appears to adhere to a normal response curve. The peak is on the date of the aspect with a gentles drop off of activity following the event. Large aftershocks cause this type of pattern to occur. 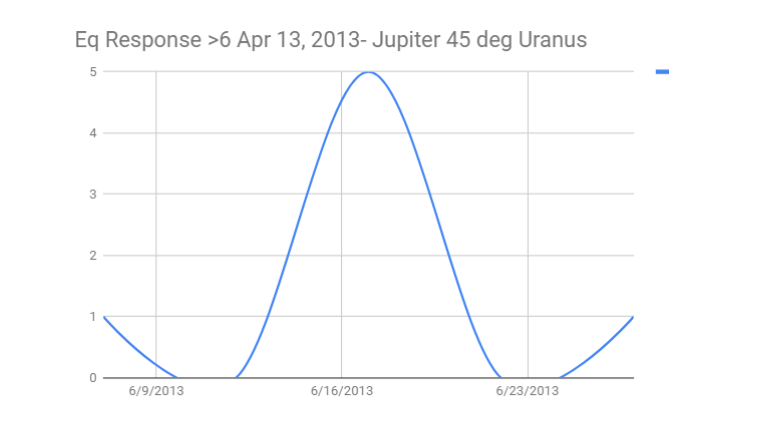 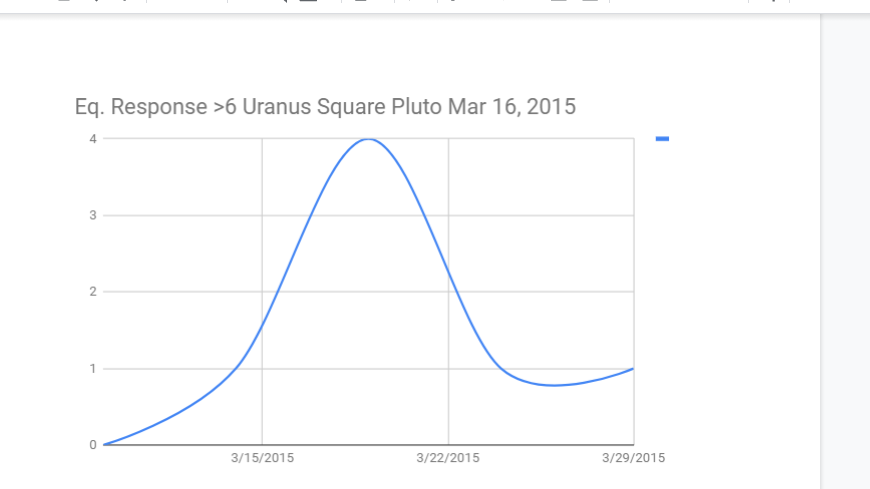 This response curve once again exhibits a Mexican Hat profile. 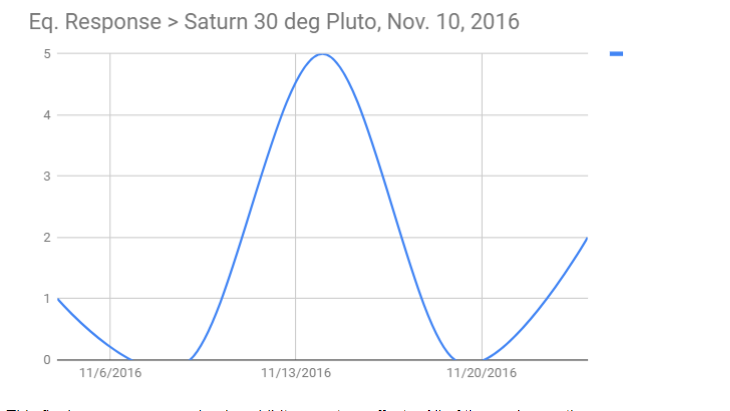 This final response curve clearly exhibits quantum effects. All of these observations are difficult to understand using non-relativistic gravimetrics, but become much more elucidated when relativity and quantum mechanics are applied.